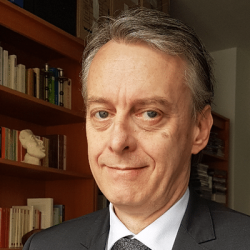 John Crowley is the Chief of Section for Research, Policy and Foresight in the UNESCO Sector for Social and Human sciences. Since joining UNESCO in 2003 he has also been a programme specialist in social science (2003-05) and head of the communication, information and publications unit (2005-07), chief of section for ethics of science and technology (2008-11) and team leader for global environmental change (2011-14). Before joining UNESCO, he worked as an economist in the oil industry (1988-95) and as a research fellow at the French National Political Science Foundation (1995-2002). He received his PhD from Institut d’Études Politiques de Paris (1995) in Political Science with his dissertation focused on immigration. John was also editor for the UNESCO-published International Social Science Journal from 2002 to 2015. He has published a further 100 academic articles and book chapters, mainly on political theory and comparative politics.

John is the institution lead for HABITABLE’s WP9 and UNESCO’s involvement in WP3 and WP6.