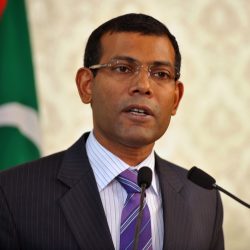 Former President of the Maldives
Expert External Advisory Board

Often dubbed the ‘Mandela of the Maldives’, Mohamed Nasheed was the Maldives’ first democratically elected president. He remains a figurehead for the promotion of human rights and democracy in Islamic countries, and an international icon for action against climate change.

During his time in office and thereafter, Nasheed has played a prominent global role advocating for action to curb greenhouse gas emissions that threaten his nation. In 2009, to highlight the Maldives’ vulnerability to rising sea levels, Nasheed famously held a meeting of his cabinet underwater. Nasheed also implemented policies to turn the Maldives into the world’s first carbon neutral country by 2020.

President Nasheed won the 2009 Anna Lindh Prize, in recognition of his work promoting human rights, democracy and environmental protection. In September 2009, Time Magazine declared President Nasheed a ‘Hero of the Environment’. In April 2010, the United Nations presented Nasheed with its ‘Champions of the Earth’ environment award. In August 2010, Newsweek named President Nasheed in its list of ‘World’s Ten Best Leaders’. In 2012, The Island President, a documentary feature film about Nasheed, was released in theatres worldwide. In June 2012, Nasheed was presented with the James Lawson Award for the practice of non-violent action.