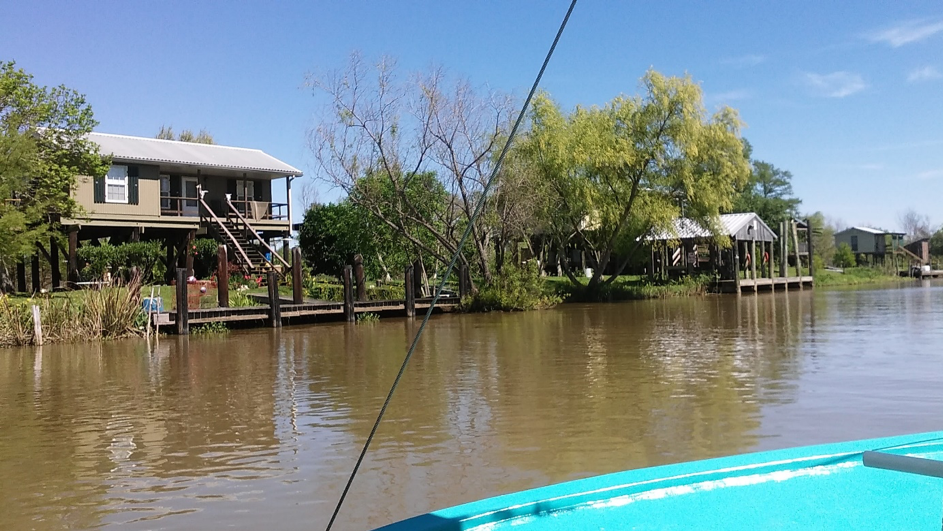 This coastal-deltaic state in the U.S. South exhibits the diversity and complexity of the phenomena we label environmentally induced migration.

The Mississippi River opens its mouth to the world in Louisiana. From there it has sent resources and people around the world and welcomed, sometimes into captivity, people of many nations. But migration is not confined to the state’s history, it is a prominent feature of its present. Much of the dynamism of migration in the state today comes from the ever-changing deltaic environment upon which it lies. From social-environmental disasters to feats of modern ecological engineering, the drivers of migration are diverse. The one constant, however, is that moving is never just a matter of pure relocation. There are wins and losses, both for the life of the state and for the people who move.

The tragedy of Hurricane Katrina is sadly the first thing that comes to many minds when thinking about Louisiana and its most famous city, New Orleans. As the hurricane brewed into a category 5 in the Gulf of Mexico in August of 2005, hundreds of thousands of people prepared to leave the city. Many fled to upland parishes, particularly further up-stream to the areas around the state capital, Baton Rouge. Others left the state for Texas and beyond. Though the storm slackened to category 3 as it hit the city, it caused loss of life and flooding damage which prolonged the city’s evacuation for several weeks. Recovery since then has been slow and socially uneven. The initial recovery was led by wealthier, white New Orleanians, with Black and poorer residents being slower to return, and more likely to be permanently displaced (Fussell, 2015). Massive investment in flood protection structures directly after the storm, and a 50 year, $50 billion dollar plan for state-wide protection and ecological restoration, called the Coastal Master Plan, is hoped to prevent and reduce the damage from future hurricanes (CPRA, 2017).

Though massive disasters like Katrina cause huge and rapid movements of people, migration often happens in contexts of slower, less dramatic and constant patterns. This is precisely the case in Louisiana where for the past 60 years people have slowly bled from rural and coastal areas inland and toward urban areas (Colten, Simms, Grismore, & Hemmerling, 2018). As is usually the case, the motivation is not only environmental. Whereas people are pushed by the threat of repeated flooding, they are, at the same time, pulled by economic opportunities and attachment to social networks.

As was the case with evacuation during Katrina, people with less resources are less able or willing to move. Inward migration leaves behind coastal communities which are older, poorer and more vulnerable, with a shrunken tax base for local government investments. When younger people leave home this does not mean that their ties to the community, either personally or economically, are forever severed. Often these young people bring income back to coastal communities and establish social links between the coast and inland communities (Colten et al., 2018). The inward migration of the young brings economic benefits to some, particularly those who move, but vulnerability concentrates in the coast.

The pattern of the slow erosion of coastal communities has been recognised by state planners, who are taking a number of steps to address it. Beyond the construction of large-scale defences, like levees and sea-walls, the Coastal Master Plan also includes a nonstructural program. This includes flood proofing on commercial buildings and elevating homes on huge wooden pilings to remove them from harm’s way. In the most extreme cases, it means buying people out of their homes. But although home buyouts might lessen the financial burden of migration, they cannot compensate for the loss of community or place-attachment that go with it. The state’s non-structural program is still under-funded, so for now the piecemeal movement out of the coast will continue without compensation.

We often think of environmental change, in the presence of mediating social factors, as a driver of migration, but evidence from Louisiana shows that state responses to environmental change can equally be a cause of migration. This was part of the findings of my own PhD research (O'Byrne, 2020). One controversial feature of the state’s ecological restoration program are called sediment diversions. These structures are built into the levees of the Mississippi River to deliver sediment-rich river water into areas of the Delta that have been starved of sediment after a century of engineering of the river for navigation and flood control. Diversions will introduce freshwater into brackish bays causing the productive areas for commercial fish species to be relocated. These diversions, in turn, are likely to necessitate the relocation of the fishing communities that rely on these resources for their livelihoods.

This has caused tension between fishers and the state. In a meeting between state officials and fishers, one woman raised the topic of induced relocation: “If we have to move through forced mass migration, we are going to wipe out other areas,” she argued. She was pointing to the fact that migration does not take place in a vacuum; fishers moving to other areas of the coast would put additional pressure on other communities, perhaps leading to conflict. So far, the state has no provision to help fishers adapt or deal with community and place-based attachments that will be lost if they are forced to move.

One unusual option that the state might turn to is the managed relocation of an entire community. Due to the massive loss of land suffered by the Native American community of Isle de Jean Charles, where only 1% of the island’s land remains above sea-level, the state, assisted by federal funding, developed a program to relocate the entire community to higher land (Crepelle, 2018). As one might imagine, the logistics of this process have been complex, as have the, legal, political and cultural dimensions, not least because of the state’s cruel history of forced relocation of Native Americans.

The Isle de Jean Charles program has raised a number of questions of general importance to those interested in directed migration programs: who belongs to a community? Can it include those who were forced to leave before the program? What constitutes culturally appropriate relocation, and how is this to be measured? And how do we factor in employment opportunities when relocating communities of residence (Crepelle, 2018)? Answering these questions, and learning from past mistakes, will be crucial if this kind of managed relocation is to become part of the coastal management response as sea-levels continue to rise.

Looking from the outside, Louisiana displays a diversity of phenomena we call environmental migration and its effects. It can be rapid in the wake of calamitous disaster or a slow drift inland. Migration can be left to the disorganised forces of necessity and desire, or it can be controlled, planned or even imposed. It brings benefits and new opportunities to some, but it increases the vulnerability of others. For researchers this suggests we must avoid one-size-fits-all explanations in favour of context sensitivity, while we recognise broad distributional patterns replicated across space and time.