Staying and circulating in the Pamirs of Tajikistan: enjoying amenities and dealing with vulnerabilities 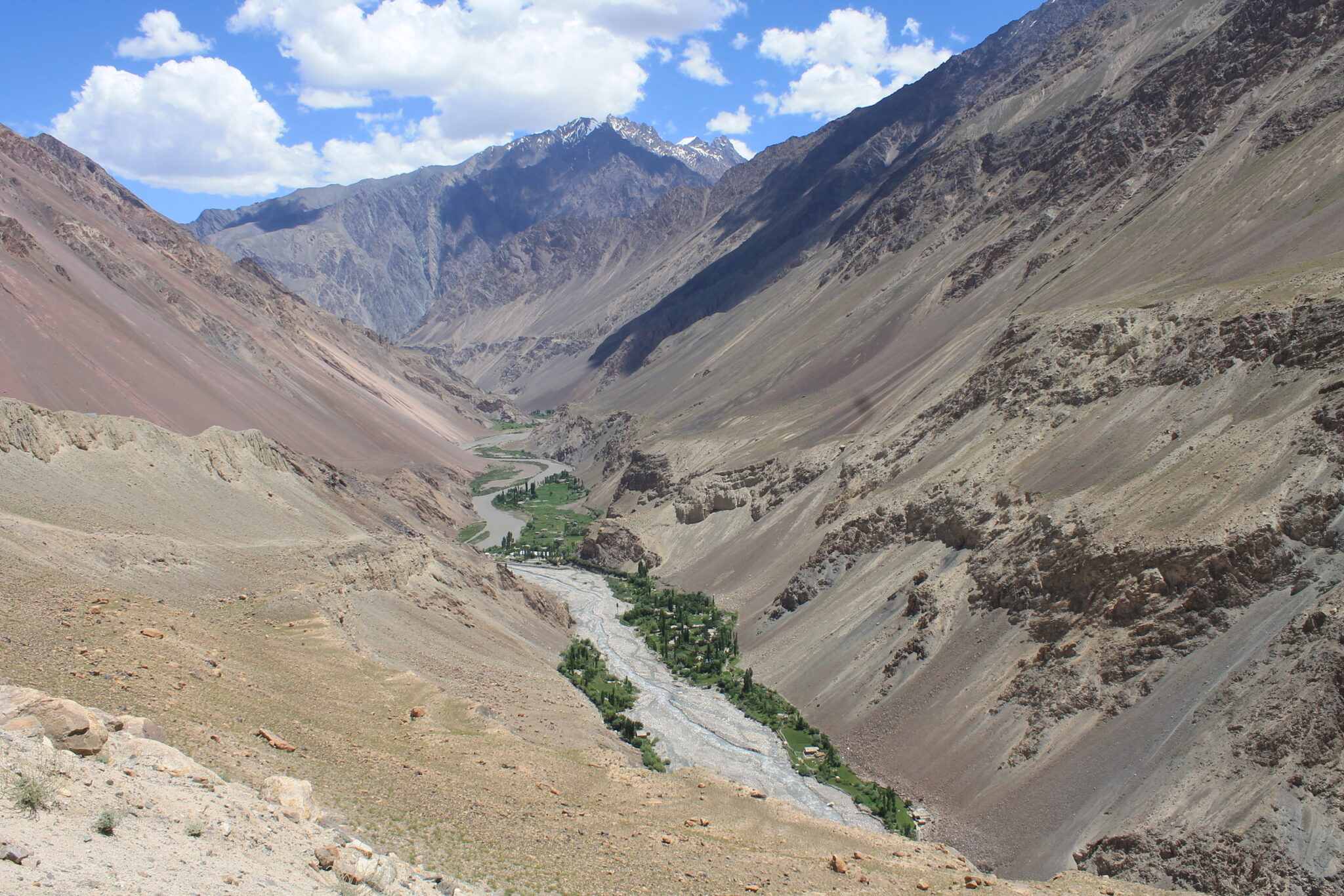 This blog post was written by HABITABLE partner University of Neuchâtel. It is part of a series of monthly blog posts that will be released by the HABITABLE project and written by different partners within the consortium.

Mountain areas have not received much scholarly attention from the field of research on the relation between environmental conditions and mobilities. However, mountain communities have long histories of altitudinal mobilities between lowlands, mid-mountain areas and high pastures according to resource availability and land-use patterns (Kreutzmann 2012). Mountain areas are often described as a hot spot of climate change suffering from the consequences of rapid glacier retreat. The Intergovernmental Panel on Climate Change has showed that glaciers are shrinking in mountain areas, which modifies the frequency of related hazards (Hock et al. 2019). Glacial retreat is projected to decrease the stability of mountain slopes and to increase the number and area of glacier lakes, which may result in landslides and floods.

Photo 1: The village of Basid in the Bartang Valley, seen from above. Credit: Suzy Blondin.

In the Bartang Valley of the Pamirs of Tajikistan, situated in the Kuhistoni-Badakhshon Autonomous Province, residents are at risk of multiple environmental disasters. The threat posed by the presence of Lake Sarez in the Upper part of the Valley is one of the most famous and pressing issues for Bartang. A natural dam formed in 1911 following a strong earthquake has created a huge lake. The resistance of the dam is uncertain given the seismicity of the region. Its collapse would be devastating not only for Bartang but also for downstream valleys down to the plains of Uzbekistan and Turkmenistan (Bliss 2006). The residents of the Bartang Valley also face river floods in the summer, which frequently damage infrastructures and lands. Rainfall also triggers destructive rockfalls, in Spring mostly. Given the aridity or semi-aridity of the region, residents irrigate their lands through an ancestral system of channels whose water originates from glacier-fed rivers (Bliss 2006). As such, agriculture, which they practice for subsistence, does not seem to suffer much from rainfall variability or higher temperatures currently. However, concerns are raised as to how the water stock will evolve in the coming decades as glaciers shrink (Hock et al. 2019).

Such environmental risks have various impacts for the populations. For instance, the only road of the Bartang Valley is usually flooded in summer and occasionally blocked by avalanches or rockfalls. Road closures disrupt mobilities to nearest towns and cities, which prevent residents from accessing healthcare facilities and food markets among others. In addition, in the recent years, some houses have been destroyed by floods and rockfalls, pushing residents to move to safer places. In some cases, people have resettled in under-equipped areas where they have been living for years without access to electricity and with a limited access to clean water. In the village of Basid, residents are planning a resettlement in a flat land up the village, which is considered safe from floods and rockfalls but where there is currently nothing but rock and sand. Adapting to environmental risks is particularly challenging in a place like Bartang given existing vulnerabilities such as high poverty and sociopolitical isolation.

If the residents of Basid envision such an ambitious resettlement, it is because many of them express a desire not to leave the Valley. The multiple meanings their Valley conveys and the biophysical and material elements to which they are tied shape their attachment to Bartang. For instance, some veteran trees and shrines are said to provide the residents with a strong protection. Some of these special places and entities are considered to safeguard inhabitants from the dangers of environmental disasters or travelers from the dangers of journeys.

Photo 2: A shrine in the village of Bardara. Credit: Suzy Blondin.

The Bartangi are also attached to biophysical amenities offered by their environment. Air and water from rivers are perceived to be particularly clean and to render the Bartang pure, unique and unspoiled. Some consider that this makes residents more resistant physically and endowed with a stronger immune system.

Conceiving their environment as rather pristine, many Bartangi tend to reject the idea of life in the city where people are perceived to suffer from pollution, violence and hard work and to be spoiled by money and consumerism. In contrast, the Bartang Valley is sometimes envisioned as a refuge and a haven of tranquility. Some former migrants to Russia, many having suffered the difficulties of labour migration in Russia, see the Valley as a place to retreat. At the onset of the COVID-19 pandemic in Spring 2020, many residents considered their Valley as protected from the virus outbreak given its purity and remoteness from highly populated areas, which somehow reinforced the idea of the Valley as a shelter. Such meanings and representations of the Valley play a crucial role in immobility aspirations despite risks, or at least in encouraging circulations and “reversible mobilities’’ (Kaufmann and Montulet, 2008) between the Valley and other places.

The place attachment experienced by the Bartangi helps to understand why they may choose to remain in their lands and to deal with pressing socioeconomic vulnerabilities and environmental risks. For some, leaving homeland may even be considered as morally ‘bad’ (ganda) and as a form of abandon. On the moral and spiritual levels, taking care of the homeland and transmitting the related cultural heritage seems particularly valuable. Staying in place also means taking care of the most vulnerable individuals including children and the elderly. Brides usually move to their husband’s parents’ house (especially if the groom is the only or youngest son) where they become the main caretaker. This social role makes women more prone to immobility than men. This is particularly visible since the Bartang Valley is a hot spot of labour out-migration, mostly masculine and directed towards Russia and Dushanbe, the capital of Tajikistan. In this context, out-migration reshapes gendered roles, responsibilities and vulnerabilities (Reeves 2011; Blondin 2020).

An important part of the Bartangi population migrates to cities to access higher education and work. Temporal moves also allow the Bartangi to purchase products and services which cannot be found in their villages. Rural-urban mobilities on various time and spatial scales set the pace of life in Bartang. Out-migration internally to Dushanbe and internationally to Moscow enables the Bartangi to support livelihoods back “home’’ and often to ensure one’s livelihoods for the coming years since the money earned “away’’ helps to build a house or to get married back in the homeland for instance (Cleuziou 2013). Russia is often envisioned as a place to work, earn money and experience the city life but not as a place to settle in the long run. Thus, Bartangi households are usually made of members who leave, work and send remittances and members who stay and take care of lands and family members in need. Such translocal livelihoods, in Tajikistan as in numerous areas all over the world, have become challenging at the time of the COVID-19 pandemic because of the mobility disruptions it caused and the economic downturn affecting Russia. Some migrants in Russia have been unable to work, to meet their basic expenses and to send money back home[1][2]. This is likely to cause a dramatic decrease in remittances to Tajikistan, where they accounted for about 28.6% of the Gross Domestic Product in 2019[3]. Some future migrants have also been trapped at home while others were trapped ‘in migration’.

The variety of mobilities to, from and within the Pamirs of Tajikistan, unfolding on diverse spatial and time scales, form a complex mobility system which is highly vulnerable to different kinds of disruptions of political, economic and environmental natures. Nonetheless, they are crucial in helping populations deal with the multiple risks they are facing and preserve bonds with the place they call home.

Blondin, S. 2020. Understanding involuntary immobility in the Bartang Valley of Tajikistan through the prism of motility. Mobilities 15(4), 543-558.

Kreutzmann, H. 2012. After the flood. Mobility as an adaptation strategy in high mountain oases. The case of Pasu in Gojal, Hunza Valley, Karakoram. DIE ERDE–Journal of the Geographical Society of Berlin 143(1-2), 49-73.

WP4 and WP5
University of Neuchâtel, Institute of Geography (IGG)